When we started looking for our first home 5 years ago, I desperately wanted a yard. A fenced in yard so I could have a dog and a garden. Turns out the dog was easier to maintain then the garden. That first spring Brian dug out a corner of the yard and built me a garden, complete with a rabbit/dog proof fence. And since then that garden has probably held more weeds than viable vegetables. It’s hot in Florida, things die and then I lose interest. It’s sad. But every spring I try again. Two years ago I bought $40 worth of seeds online to have “fancy” tomatoes and “carnival” peppers. They never even made it out of the house. Last year I didn’t even try. This year however, this year would be different.

Lowes had a sale in March on veggies so one wild Saturday night after a 4:00 showing of the Veronica Mars Movie, we headed over to stock up. And so we have red, green and orange bell peppers, icebox watermelon, two types of beefsteak tomatoes, yellow pear tomatoes, and the cucumber that took over the world. It’s still pretty early to claim success. I haven’t actually been able to eat anything yet BUT I must say, I have some pretty happy veggies on my hand, and I will credit it to my $20 mister landscaper kit and timer that waters everything twice a day while I watch from my bedroom window. 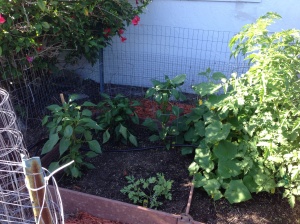 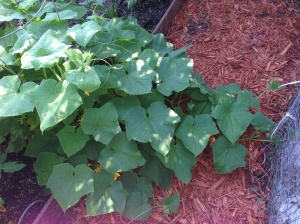 Cucumber, still going, all the way up the back fence.

It’s my own little science project in the backyard. It’s amazing how fast every grows and changes literally every day. I can look at it before I leave for work and 8 hours later it is completely different. I check it daily to try and keep up with the weeds, but also to make sure the cucumber isn’t choking any of it’s neighbors. It’s tried. At this rate I will have years worth of pickles in my fridge, which I’m looking forward to trying, along with some hot sauces and relishes.

In addition to the raised bed, I have a patio full of herbs and citrus trees, cherry tomatoes, jalapenos, and hot cherry peppers. There’s a lot going on! Be prepared for more posts as things live, die and hopefully give me endless amounts of produce so I don’t have to by $2 tomatoes at the store. 🙂